Turns out someone not so cleverly decided to put an upper limit on the length of the password during (offline) account creation. I already wondered about it while entering, but didn’t give it much thought at the time. Essentially I kept typing my password up to its full length but at some point the filled circles (or dots) stopped appearing for every key stroke. My thought was that this must be some new feature where Windows tries to make guessing the password length harder by not showing key strokes after some point.

Instead after rebooting once I ended up with an account into which I could not log in. Because evidently my password had been truncated. Some further investigation during the subsequent rerun of the setup suggests that the password is cut off after 15 characters, but it’s not clear whether the last character keeps getting updated with more keys strokes or not2. 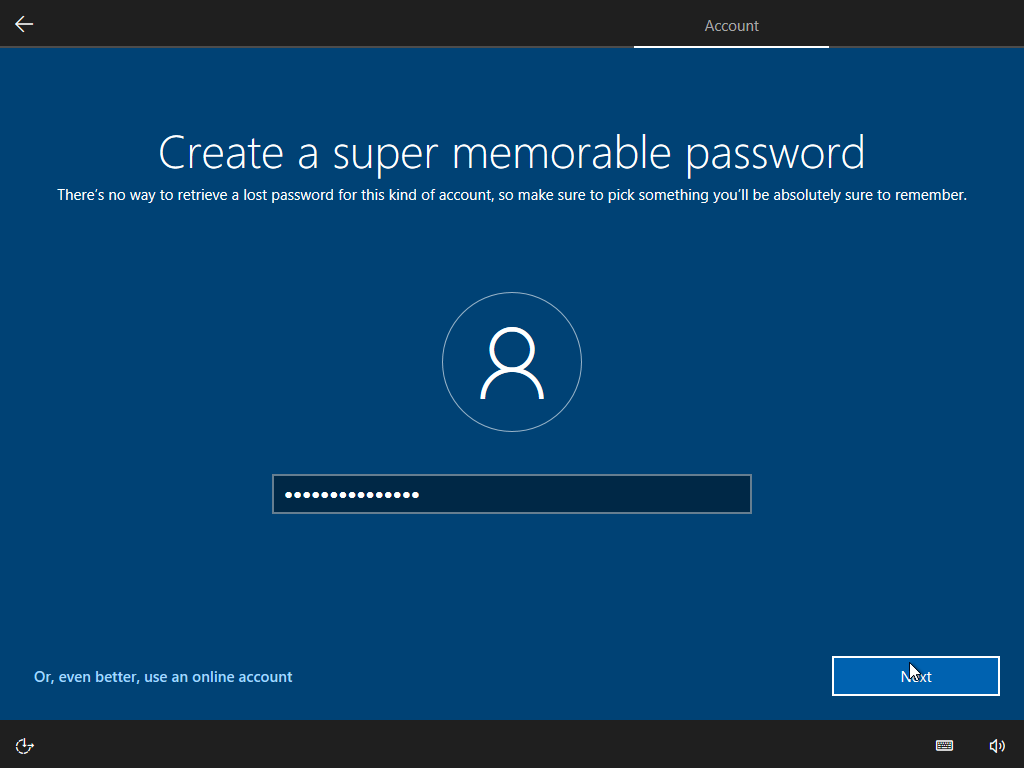 Dear developers at Microsoft, truncating password during input is a patently stupid idea. Please don’t do that. Instead how about acoustically (“beeeeeep!”) or visually (a flickering screen or simply a written note about the length limit) or otherwise notifying me of the fact that there is an upper limit, so I don’t have rerun the whole installation routine in order to find out at what point the truncation happens?! Thanks in advance.

Btw: in the process of doing a fresh installation I noticed several instances of negligence on part of the “Creators”. Like the fact that typing the starting letters of the location or the keyboard layout would not automatically focus the respective list item and instead I had to scroll by mouse to the desired item. I hadn’t seen that before because the system in question had been updated from Windows 8.0 via 8.1 to Windows 10 and subsequently Windows 10 build 1607.

This entry was posted in EN, Software and tagged Creators Update, Windows 10. Bookmark the permalink.