Trying to install vSphere client 4.1 on my private machine failed (with error 4113) the first times. It turned out the problem was the “Microsoft Visual J# 2.0 Redistributable Package” was already on my system as part of Embarcadero RAD Studio 2010. Whoa. Another problem seemed to be that the .exe that one uses to install the vSphere client does some magic beforehand (including the attempt to install “Microsoft Visual J# 2.0 Redistributable Package – SE”). Something that cannot be influenced by command line parameters, as it seems.

So what I did was during the error prompt, I visited the location where the “VMware vSphere Client 4.1.msi” (%MSI%) had been extracted to. I copied it to a temporary location.

Looking into the MSI database turned out to be enlightening. It seemed like the trick is to set a property named USING_VIM_INSTALLER when passing the database to Windows Installer. And here is what I did:

… and it worked. And the vSphere client works perfectly with this version of J#, although of course I may not have used all the various features it offers. 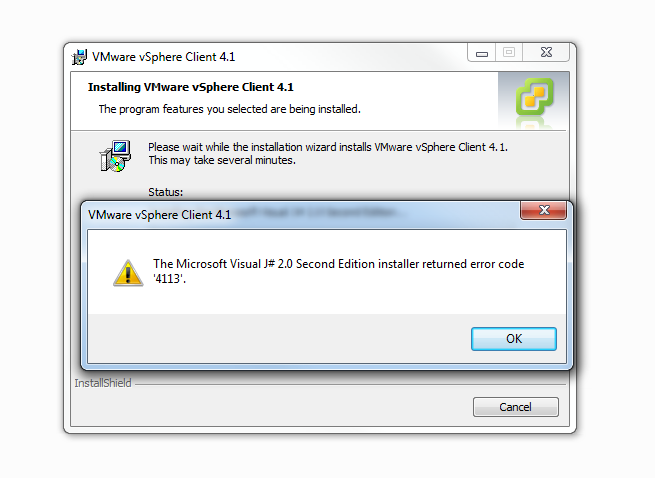 PS: USING_VIM_INSTALLER is one of the properties upon which the installation of the “Microsoft Visual J# 2.0 Redistributable Package – SE” package depends.

This entry was posted in EN, Software and tagged installer, setup, VMware, vSphere. Bookmark the permalink.